Working to improve our community

To find out what your parish council is doing, sign up to receive our e-newsletters directly to your inbox - http://eepurl.com/h0j7iX alternatively pick up a copy from the Parish Office or Roade Community Library. 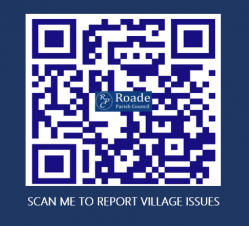 SCAN ME TO REPORT VILLAGE ISSUES

Very little is known about early settlement in Roade. Archaeological evidence is sparse but some items from the prehistoric to Roman periods have been found in the parish. Roman coins and pottery were found in Roade before 1904 and in the 1920s and 30s a flint arrowhead, an Iron Age ring and a Roman bronze pin were found in the Primary School garden. The evidence indicates that there were people living in the parish from prehistoric times but it is not clear how long the site of the village has been continuously occupied.

The place name 'Rode' from the Old English word 'rod' meaning 'a clearing in a forest', indicates a settlement in a wooded area in Saxon times. Doomsday Book records a landholding for one plough occupied by two smallholder's and some woodland at Roade and a larger area of 'waste' which later became the Hyde estate.

The oldest building in Roade, St Mary's Church, dates from the early 12th century, when it was owned by the Norman lords of Hartwell and Ashton.

The earliest known maps of Roade were made for the second Duke of Grafton in the 1720s. Many of the old stone houses in the village are shown on these maps.

After the open fields were enclosed in 1819 the landscape around Roade was transformed but the village itself did not change much until the railway arrived in the 1830s bringing more jobs, houses and pubs.

The factory that used to be situated at the end of The Leys opened around 1910 and became Pianoforte Supplies Ltd after it was taken over by Cyril Cripps in 1923. The Cripps family and their businesses were to have a major impact on the village. The factory expanded until the workforce reached a peak of around 1,800 in the 1960s. The Cripps family became important benefactors and, although the factory is no longer there, their business has prospered elsewhere and is still a major landowner in the village.

The railway station closed in 1964 but Roade remained an important service centre for the surrounding area, with a large secondary school, built in 1956.

Roade is still very much an 'open village' where numerous small businesses are based. Although many people work elsewhere, recent surveys have shown that residents enjoy living in Roade and the village has a strong sense of identity and community spirit.

Working for the community of Roade